Third in our Open Boot series, Vanessa McCloskey opens the boot of the edition-driven project ‘Assembly Line’ by artist Shane Bradford to see what rolls off their conveyor belt for the ACBF Flora & Fauna edition.

Shiny orange and red model cars are being hand dipped for Bradfords new series ‘SUNRISE’, a new edition Assembly Line will release at the ACBF Flora & Fauna Edition on May 15th.

Shane: ‘I decided to release them at the ACBF because they exemplify the original Assembly Line idea of Henry FORDs factory innovation. I chose colours that are sunny and spring-like as I wanted to release something optimistic as we emerge from the horrors of the last year - for now, and in this country at least.’ 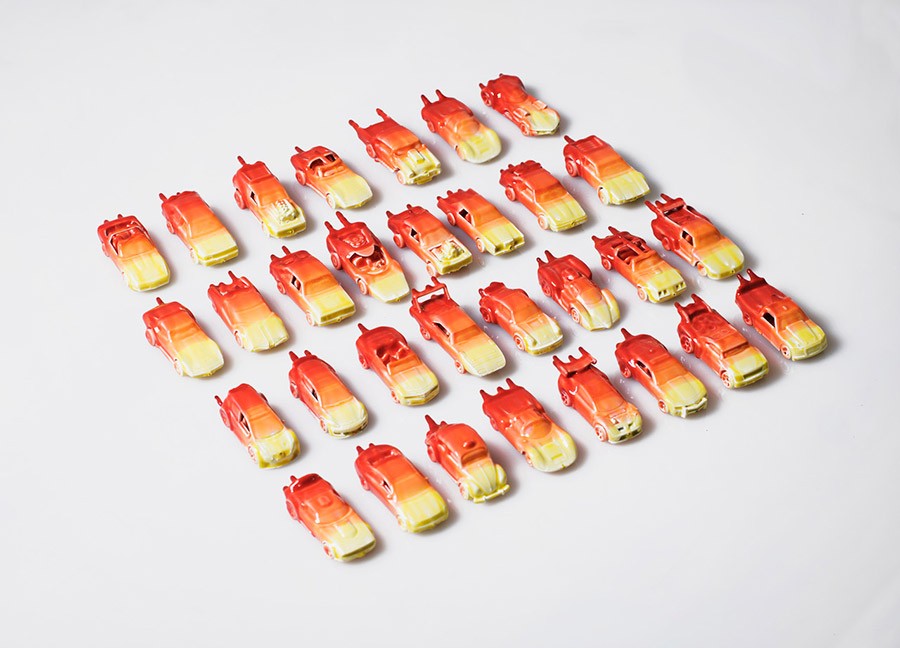 Vanessa: I really love the fact that you can look inside some of the cars and see the interior. It makes me wanna open the door, jump in and go on a road trip!

Shane: Yes, I mean I can’t really take credit for the detail. The cars manufactured by Matchbox Lesney in the UK and others in the 1970’s are so full of intricate detail as a result of innovations in die-cast moulding techniques from the 50’s onward. Scaling down has a special appeal to humans, doesn’t it? Makes us feel big maybe, or perhaps it brings out a primordial parenting instinct! I don’t know. But yes, the way the paint finds its way through the minute detail of the object is a great source of satisfaction to me.

Vanessa: Your previous editions had names like 'Crank Shaft' or 'Muscle', how do you name your editions?

Shane: The names you mention there are for the Pink Petrolheads edition. Naming art is always tricky, but I have fun with naming the cars - the game is to send up the macho-sexual tendency of words associated with automobiles. They’re all terribly phallic! Thrust, piston, shaft, stick, injection, horsepower... I mean, come on! Cars have always had pseudo-sexual and gender-specific connotations of course, it’s fun to play with that. I tried to make the names of the new ’Sunrise’ edition for the ACBF all have something to do with the sun…it’s not easy and I keep changing them when I think of something better. ‘Factor 50’ and ’Scorsche’ are my current favourites.

Shane: I started dipping items in vats of paint in 2004. It kind of peaked in 2017 when I was dipping sheets of corrugated steel winched down from the roof into slender vats containing over 100 litres of paint per colour. It was quite a process. I made many paintings this way. Ultimately though it is just a means of application. I use it to apply my own narrative to the assumed meanings of things. It inherently contains a very lyrical destruction/creation mechanism, good for staking claims to novel ideas by altering old ones.

Vanessa: Are there any objects you would never dip or that are really difficult to dip?

Shane: The dipping possibilities are restricted only by resources really. I’d love to do a double-decker bus but the logistics! Actually, I think that if you were to do it on an industrial scale it might lose some of the intimate magic that you talk about with scale. A drip is only ever the size of a drip so it gets lost a bit when you go large.

But the beauty of the dip is how the paint can find a beautifully straight line even through the cross-section of the most complex object. It’s pretty unique in that way. Heavy things are to be avoided. As are organic or living materials. I dipped a banana before thinking the seal of the emulsion would preserve it somehow … it didn’t and it got pretty rotten eventually.

Judge A Book By Its Cover by Shane Bradford

In another area of the spacious south-London studio colourful books from his series ‘Judge A Book By Its Cover’ are laid out. Their glossy layers of emulsion are seemingly still dripping off the covers, turning them into surface-only objects, impossible to read.

Shane: Assembly Line artists including Benedikt Hipp, Rose Eken, Ben Cain & Patrick Lacey of Åbäke all work with galleries and art institutions, and we love galleries. But AL is a chance to work independently with other artists and to have more control over the mechanisms of finance, display and context. Just as we pool some of our profits we also share each other's networks to an extent.

AL makes multiples about multiplicity, that’s the reason for it. It is a vehicle in which to make excursions into parallel fields that exist somehow alongside, yet separate from the field traditionally understood as art. As such we explore relationships between art, production, economics, and commerce and what that tells us about how and why we place value on things.

Vanessa: Assembly line will have a live zoom link into the studio for the Flora & Fauna event on May 15th, could you give us a little teaser of what visitors can expect?

Shane: We will offer a raffle for one lucky Zoomer to win a ’Sunrise’ edition car at the end. We’ll do a little tour around the factory (studio). We are also hoping to get one or two of the AL artists to join the Zoom and talk briefly about their editions and hopefully, I’ll manage to do a dipping demo.