We invited Ric Blackshaw of 'KINspace to write about his relationship with legendary graphic artist Mark Wigan and his commitment to help Marks very personal campaign to raise funds for essential cancer treatment for his wife, the artist and film maker Kerry Baldry.

'The association between ‘KINspace and the graphic artist Mark Wigan is barely a year old but it honestly feels like he’s been there all my career. We’ve been circling the same planet artistically speaking for twenty odd years without our orbits crossing. When the Scrawl books were published between 98 and 2001 chronicling the nexus between fine art, graffiti, illustration and youth subcultures, there was always the knowledge that Mark had forged this very path 15 years previously. When I started Scrawl Collective with Will Barras, Mr Jago and Steff Plaetz and we travelled the globe painting murals in nightclubs, bars and skateparks it felt as though we were part of some new phenomena but really we were treading a path well worn by Mr Wigan before us. The fact is it’s very hard to see how anything I’ve done in my career would have happened in quite the same way were it not for Mark Wigan. If he didn’t exist we’d have to invent him!

A cursory flick through the highlights of Marks career: writing and illustrating for i-D Magazine chronicling Londons club scene in the 1980”s; painting murals in venues from Kensington Market to the Tokyo nightclub P.Picasso; having Andy Warhol describe his murals in the Limelight club in London as “Hot” and personally recommending him to the owner Peter Gatien to do the same to the Limelight in NYC: hanging with Keith Haring in his studio: co-founding the seminal rave club The Brain and club nights Love Ranch and Merry England at Café de Paris; working in Japan and finding a natural affinity with the graphic culture there; starting clothing labels; is to map the course that so many artists and graffiti writers took after him. After all that many people would perhaps take their foot off the pedal a bit but Mark is as prolific as ever, combining this globe trotting career with (since the 90’s) regular lecturing gigs at art schools throughout the UK. Mark is currently working on an illustrated book of the medieval Welsh poem Kat Godeu – The Battle of the Trees.

ART VS CANCER : At the beginning of the pandemic Marks wife and fellow artist and film maker Kerry Baldry was told the cancer she had been treated for four years earlier had returned and without treatment she had about a year to live. Unfortunately a potentially life saving NHS clinical trial in chemosaturation of the liver (Delcath) was no longer available. NHS clinical trials for this type of cancer treatment have been cancelled due to the COVID-19 pandemic. Kerry and Mark were told the only way to prolong Kerry’s life was through this therapy, now only available privately in the UK. The treatment has been shown to reduce or stop tumors in 60% of cases. The treatment is however, expensive. Kerry needs up to six sessions at £40,000 each. For the past year Mark has been busy raising the £160.000 Kerry needs to complete the treatments via a gofundme page. He’s worked tirelessly, putting in all the proceeds from sales of his work to the fund and as of this week they managed to break the £100,000 mark. Kerry’s treatments so far have shown good results but they need to keep raising the remaining £60,000 to finish the full course of treatment.

As part of that push ‘KINspace has been selling Marks prints and donating the proceeds to the fund and we are continuing this effort on our ACBF page this year. So get over there and grab yourself a little bit of club culture history and help one of our most influential and prolific artists in to the bargain. Or donate directly to the fund here; gf.me/u/y57qsb 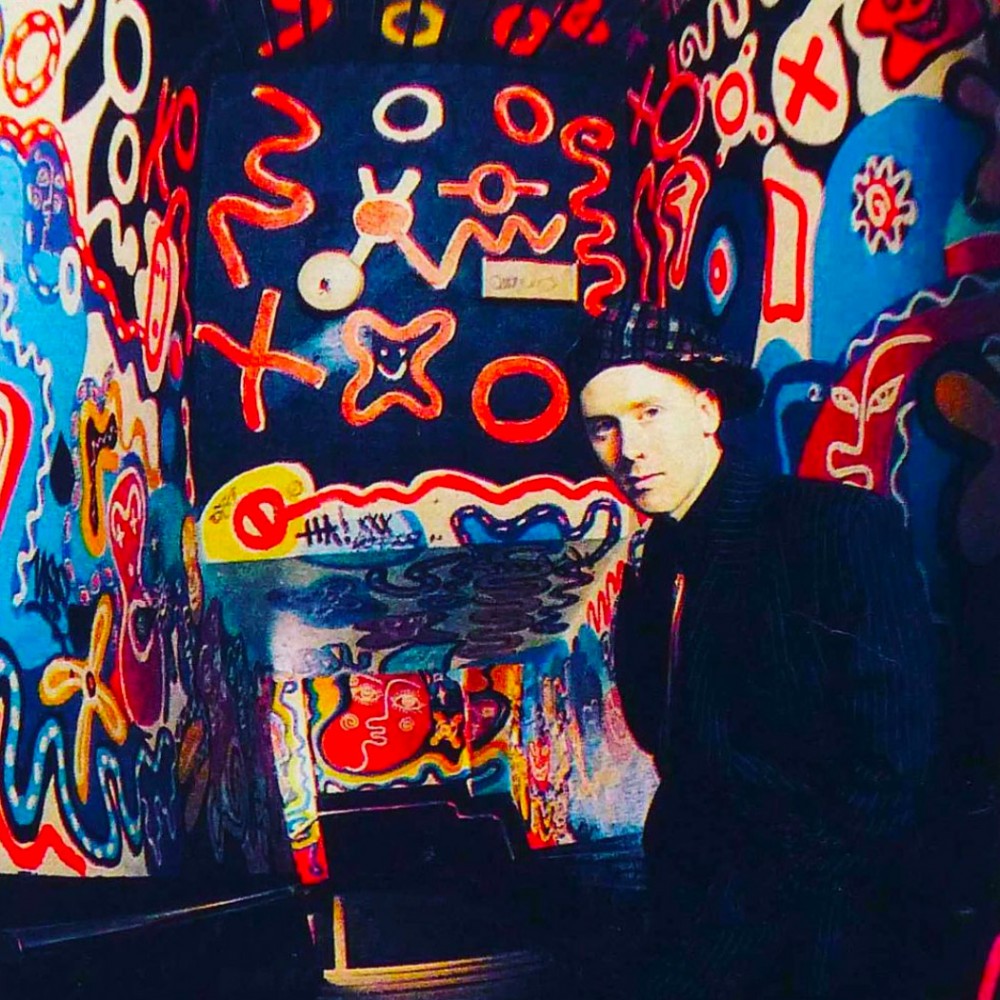