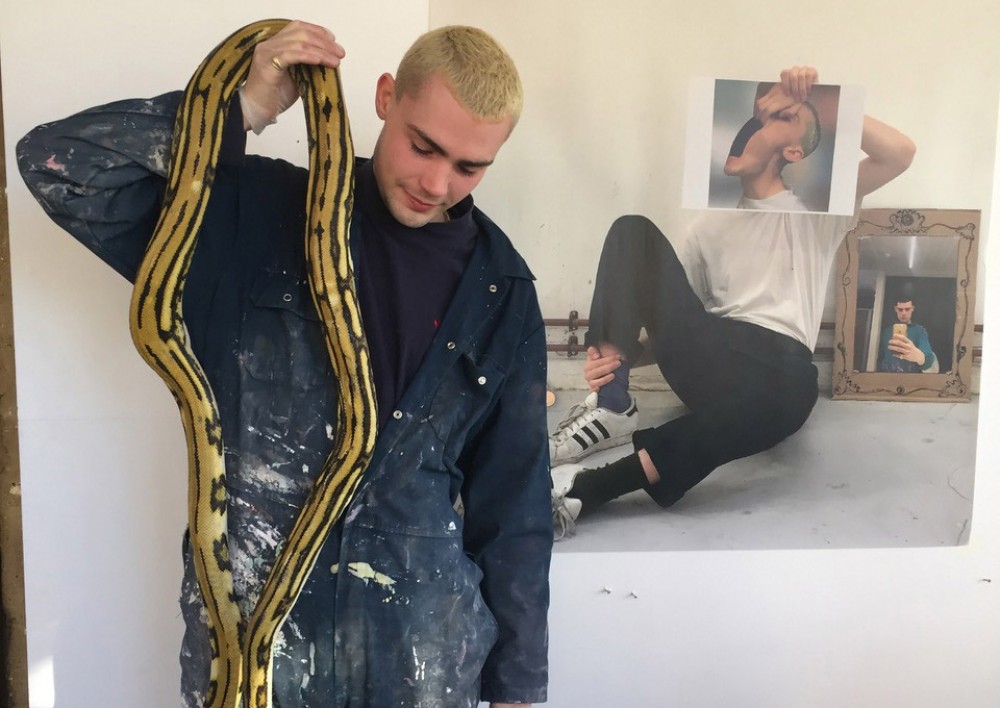 The second in our Open Boot series, Chloe Carroll visits Robert Cooper in his studio where he is making work for an exhibition and for the ACBF Flora & Fauna Edition.

Robert Cooper is hard at work in his studio at the Bomb Factory in North London when I visit on a bright spring afternoon. He is preparing not just for the ACBF Flora & Fauna Edition but also his first solo show, ‘Actaeon’, which will take place in the studio complex’s airy exhibition space next month.

Lined up on a sun-flooded wall are four drawings, loosely depicting the story of Ovid’s Diana and Actaeon, in which an unlucky young hunter is transformed into a mute deer after stumbling upon the goddess Artemis in the buff. He flees the scene, only to be tracked down and torn apart by his own hunting dogs. The tale sits comfortably within the landscapes of Cooper’s artwork, both in terms of subject and style: a colourful bestiary in which creatures twist, writhe and double-over, refusing formal stability.

Last year’s lockdown moved the artist to expand his sculptural practice – one that he honed in the studio of sculptor and taxonomist Polly Morgan, with whom he shared a show at Hix Art Gallery 2019 – into drawing, where he renders the animal form in wiry lines and, more recently, a rich spectrum of colour. His creatures contort and morph within their frames, at points dissolving into abstraction before re-emerging with the sudden clarity of a bright eye in a dim thicket across the page. In ‘Actaeon’, it is hard to know where one body ends and another begins. Directly behind the gallery space is Cooper’s studio, where a menagerie of rainbow-hued animal drawings are taped in a row across the wall. These are the drawings which will be sold at the Art Car Boot Fair. Among them are a hare, a fawn, a swan, a polecat and several lithe greyhounds. They have dainty, sinewy feet and distinct, animated faces, and are constructed of sweeping coloured pencil lines and small blocks of shading. Their structures hang loosely together in a way that could only be convincingly done by an artist well acquainted with the intricacies of anatomy (he puts this down in part to his training with Morgan and her use of animal forms). 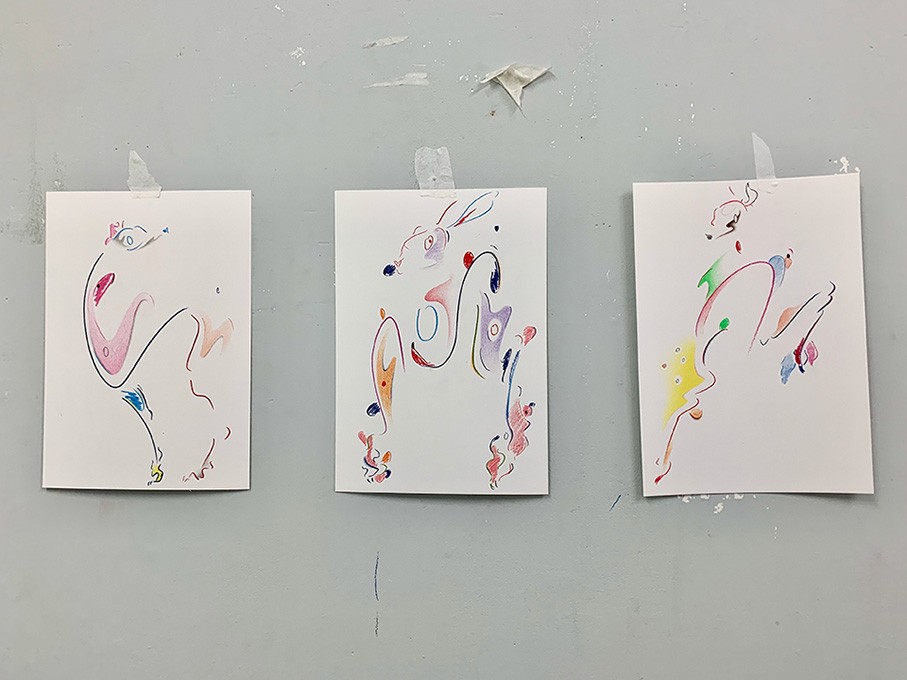 He shows me how he draws: a confident, unflinching swoops of pigment makes the spine at the centre of each composition, which then become populated by viscous, meandering limbs and patches of colour chosen for impact. A friend gave him a book on colour theory, which has informed his  assertive use of bold, dissonant hues, and he cites German Expressionist Franz Marc of Der Blaue Reiter as a key inspiration in his approach to tone. Setting colour aside, it is fascinating to see how these drawings derive so clearly from a sculptural practice.

Carefully tucked up in plastic sheeting is a large clay deer (which will sit at the centre of ‘Actaeon’), either slain or fast asleep. The sleek arch and curve of its body appears as a direct transmutation of the figures on the page; their shared line like a string of DNA. Cooper intermittently spritzes the deer’s contours with water so as to keep it slick and wet, and will keep doing so throughout the exhibition, so that it gradually leaks onto its paper bed. It is important that its form remains unfixed; that it retains a mystical potential for metamorphoses. 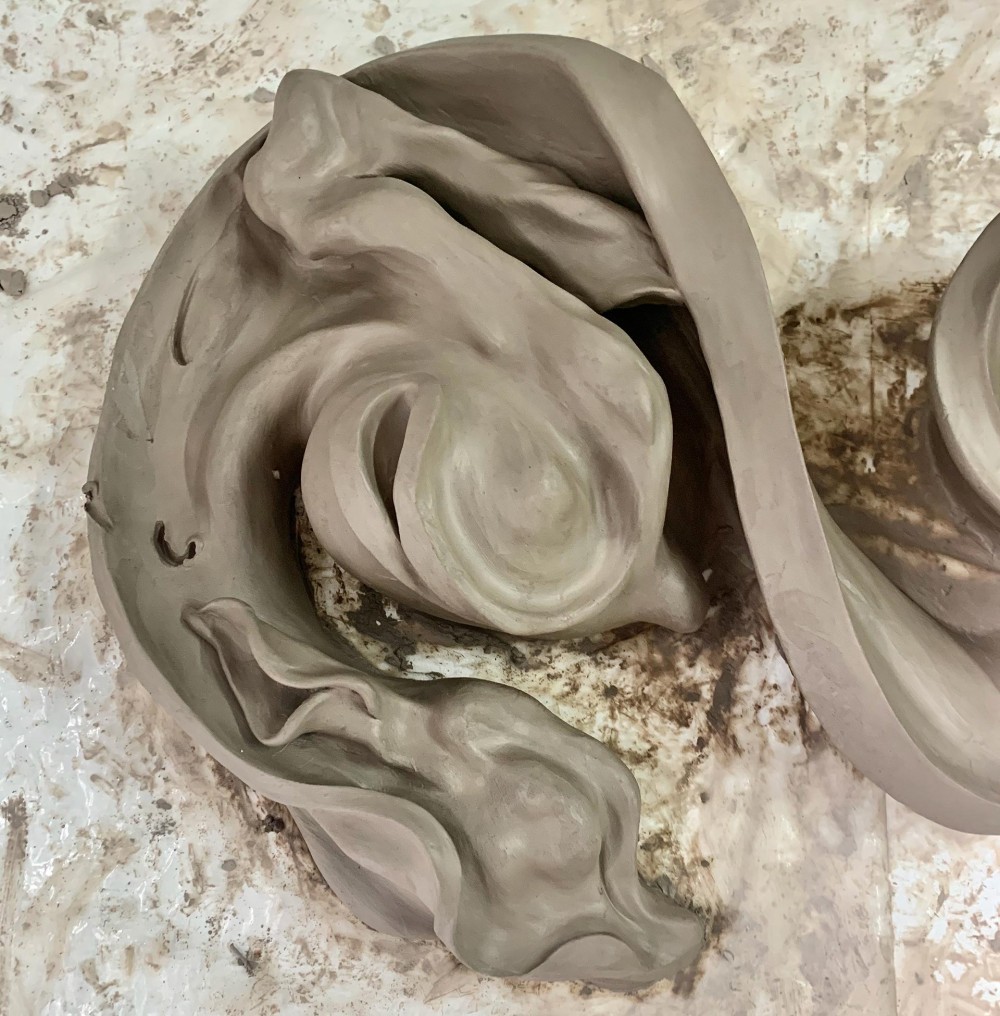 I notice an unfinished drawing of a seal on his desk, and he recounts a story about a benevolent, protective seal which once guided him away from a cove with a mysterious and siren-like pull. We talk about a myth that a bear’s offspring would be born as formless lump of flesh, with neither nose nor eyes nor ears, which the mother would literally lick into the shape of a cub (see Pliny’s Natural History for more details). Cooper’s drawings and sculpture carry a sensibility which feel in tune with this strange historical fragment: an approach to his environment and subjects as malleable, unformed things, with the potential to be moulded and shaped into dynamic, lively, fantastical organisms.

'Actaeon', a solo show by Robert Cooper, will run from 21 - 28 May at the Bomb Factory, Archway. 'FUGUE', a show in collaboration with Kate Dunn, opens on 13 June.